Fast Food Mania Tech and Breakfast - Behind The Scenes

Our Fast Food Mania Tech and Breakfast episodes were a lot of fun to make. I criss crossed the country from Richland, Washington to Winston Salem, North Carolina for Tech, and from Oklahoma City, Oklahoma to White Plains, New York for Breakfast.

Here are some photos I took along the way...

I flew from Nashville (that's another story) to Salt Lake City, and then hopped on a small plane to Richland, Washington which is on the eastern side of the state.  Lamb Weston provides fries for a ton of fast food places, including the classic waffle fry.

They tell me the potatoes in Washington are better than the ones in Idaho, and I believe them but honestly can't tell the difference. I wanted to see the water knife that cuts the potatoes in action, but we couldn't get access to that area.

After we finished at Lamb Weston, we drove across the state to Seattle. It's a really beautiful drive with breathtaking natural scenery, until you see the alien windmills.

Once we got to Seattle, a bunch of you tweeted that I had to try Dick's. So we headed to the location next to UW and gave it a shot.

If we were covering regional chains, Dick's would have made the cut. Hopefully, we'll have another season to visit again.

I enjoyed all the places we visited for Fast Food Mania, but Krispy Kreme might have been my favorite. After a long flight, I walked in to the North Carolina location greeted by this.

I love Krispy Kreme donuts, but Krispy Kreme donuts fresh off the line are insanely tasty. I'm glad I had to host, because that kept me away from eating all of the product (and left more for the crew). I learned how to fill donuts with creme/jelly as well.

The best part about KK is seeing the donuts made right before your eyes. And that waterfall of glaze...I get hungry just thinking about it. Ranks up there with the telephone in terms of brilliant inventions.

If you learned one thing from our Tech episode, it should be what to do if you ever see this illuminated in a KK window.

There are more Sonic locations in Oklahoma City than any other fast food restaurant (including McD's), so we had to go there for our show. I love that a car hop not only still exists, but is thriving these days.

One of the amazing things I learned about Sonic is that people will buy the ice by the truckload. That's right, just the ice. I don't know what's in it, but I had a soda sitting there for hours on a sunny day and the ice never melted. It's great for coolers in that Oklahoma heat.

I mentioned that I played hockey, so our director decided to put me on a pair of skates and car hop. I did okay, until I had to carry a tray with food on it. Much respect to the skating Sonic staff.

The mall we shot at for Cinnabon is in White Plains, New York, which didn't require a plane ride. We actually taped the segment on an afternoon after I worked on Howard's show in the morning. The people at Cinnabon were really great and extremely patient.

You get hungry once you smell the inside of a Cinnabon store, and playing with the goo and frosting was a wonderful experience.

The ultimate challenge was when they decided to let me bake my own cinnamon rolls. I am not a chef. I don't pretend to be. I'm much better on the other end after the cooking is done.

I struggled through the preparation of the rolls and made some mistakes, but then a funny thing happened. When my Cinnabons emerged from the oven, I couldn't believe what I saw.  I wouldn't say they were perfect, but pretty darn close to that.

Cinnabon even put them up front in the store to sell, and they were all gone within a couple of minutes.
Thank you, Cinnabon, for sticking with me!

Next Wednesday will be the grand finale of Fast Food Mania with our last two episodes - Extra Special Service and Extreme Locations. I don't want to give too much away, but Chipotle, Valentine's Day, Dairy Queen and the Pentagon will all be involved.

Thanks for watching, and please let folks know we're on Destination America on Wednesday nights at 10 & 1030 pm. If the ratings go up, we can return for a second season and hit some more great fast food places.
Posted by Jon Hein at 7:32 AM 10 comments:

Originals and Extreme Menu Items - Behind the Scenes

Here are some behind the scenes photos I know you've been clamoring for...

The original location of Dunkin' Donuts is in Quincy, Massachusetts. I did my research and pronounced Quincy (QUIN-ZEE) the right way. Loved sitting at the original counter and sampling the product.

Truth be told, my favorite donut is the traditional glazed, but at Dunkin' Donuts, those vanilla creme donuts are just too good to pass up.

We did a shot of me eating the vanilla creme donut with the creme facing in so it doesn't squirt out, but that didn't make the final cut.

The test kitchen is tucked away somewhere outside Louisville, Kentucky, right near where they keep the Colonel's original recipe.


I couldn't get the recipe, but I was able to check out the chicken and how the create all those KFC products. The hardest part about making a Double Down was resisting eating "the buns" which are two original recipe filets.

And yes, this is the outfit that's on all the Fast Food Mania merch (posters, ads, etc.). I call it my KFC outfit, and it's hanging in my closet.

We journeyed to Tyson's Corner, Virginia to find Elevation Burger, which has the ten patty Vertigo Burger on the menu. We didn't get to cover a lot of regional up-and-comers this season, but I'm glad I got to sample what Elevation has to offer.

The super griddle is an impressive piece of equipment. I love how you know exactly how long the burger will take to cook and can watch it in progress if you so desire. The shakes at Elevation are excellent as well.

If we get a second season of Fast Food Mania, I want to focus on the national chains we didn't get to, and more of the regional chains that when you travel to a town - that's the place you MUST go to.

That's all for now. Let me know what you thought of this week's shows, and I'll see you next Wednesday at 10pm with two brand new Fast Food Mania episodes on Destination America.
Posted by Jon Hein at 8:02 AM No comments:

Things continue to be insanely busy on the Fast Food Mania front.


New episodes of Fast Food Mania return this Wednesday, July 11 at 10 & 1030pm on Destination America.  Every week, we will be showing two brand new episodes back to back for a full hour of fast food bliss. This week's 10pm episode is "Originals", where we hit the original locations of Nathan's, A&W, and Dunkin' Donuts. It's one of my favorite eps of the series. 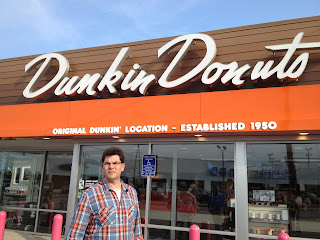 We follow up at 1030 with Extreme Menu Items featuring KFC's Double Down, Hardee's Monster Thickburger, and Elevation Burger's Vertigo Burger. 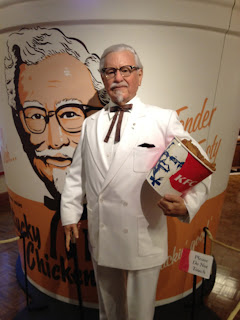 On July 4, I brought my oldest daughter Rachel to Coney Island and hosted the Great Apple Pie Dive for Destination America. This event was the appetizer to the Nathan's Hot Dog Eating Contest (no, I didn't participate), and it was a lot of fun being there. 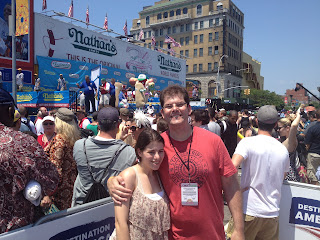 I got to hang out with all the contestants, including our eventually winner Brandi Ritter, Coney Island Polar Bear Club swimmer Julia Gloubach, Olympic gold medalist Greg Louganis, Miss New York Mallory Hagan, and New York Mets legend Mookie Wilson.  Talking baseball one on one with Mookie was a highlight for me.

The apple pie was 15 feet wide and topped off with whipped cream, nuts, caramel, and of course, vanilla ice cream. All the contestants dove in with everything they had, and it was a fun competition that came down to the very end.

After we finished up, I got to watch the female and male Hot Dog Eating Contest firsthand. Those folks aren't eating...they're devouring. Of course I had my two hot dogs and fries to capture the spirit of the day. 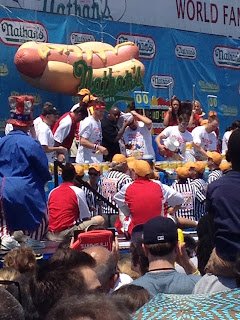 I spent the rest of the day out on the boardwalk interviewing people for Destination America talking about what makes this country great. A day like this July 4th ended up being a perfect example.

Yesterday, I recorded the voiceovers for the final two episodes of season one of Fast Food Mania. It was a bittersweet day as I'm thrilled with how the series has turned out, but saddened by the fact that the work has come to an end.

I had such a great time making this show, and I'm glad that people are enjoying it. Hopefully enough of you will tune in live Wednesdays at 10pm Eastern to get us a second season. There are plenty more fast food places to explore!

I've been traveling a lot lately putting together a different series I'm hosting for another network. Can't talk about it yet, but I think you'll like what you see and hear.

Thanks, as always, for your support. Please tune in to Destination America live on Wednesday nights at 10 so I can get back on the road in search of fine Fast Food.
Posted by Jon Hein at 8:26 AM 2 comments: