You all know how much I love the band, Rush. Apparently, the band knows this as well.

I had the pleasure of seeing my favorite Canadian trio play at The Rock in Newark and MSG in NYC. I knew I'd be up close and could possibly meet these legends, but worried that it wouldn't live up to the hype I built up in my head and forever change my view of the band.

Well, my view has changed. My expectations were greatly exceeded. 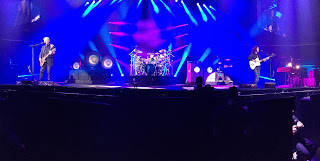 4:15 - My Stern Show pal Steve Brandano and I leave Jason Kaplan's rain-soaked BBQ in Union and head to Newark. It is pouring. I don't care. I have a chance of seeing Rush sound check. I will not miss that for anything.

4:45 - We arrive in Green parking lot 4/5 which I pre-paid a ridiculous amount to park in. My one criticism of the Prudential Center (aka The Rock) is that parking is ridiculously expensive. I hope the city sees some of that money. It could sure use it.

4:55 - Steve and I circle the stadium looking for our contact. We are at the East Gate. We need to be at the West Gate. So we circle again in the rain and wait at the VIP entrance. My brother Kevin, who puts my Rush fandom to shame, arrives wondering if he'll ever see his car again.

How big of a fan is my brother who graduated from Wisconsin? 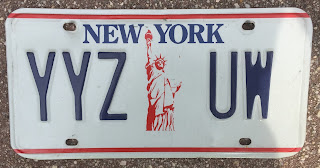 5:00 - We are supposed to meet my contact at 5pm. No sign. I text and email and eventually deduce the spot we need to be at is behind a gated entrance. I leave Steve and Kevin and walk to the booth where the guard is telling a gentleman there to meet someone from the band that he may not proceed without an escort. He tries to ignore the guard - big mistake. He realizes his error and skulks back to reconnect electronically. The guard turns to me, and miraculously my contact appears and waves me over. I wave Steve and Kevin over, although I am soaked and ready to leave them behind if need be, but they speed over and we enter the back of The Rock.

5:05 - After making our way through Rush trunks and equipment my brother is itching to photograph, we enter the empty stadium floor behind stage right where 10 people are seated in the crowd. I glance on stage, and there they are...Geddy, Alex and Neil. All in their respective areas of the stage working things out. I could leave now and be satisfied, but it gets better.

5:10 - Geddy begins "Subdivisions" and Neil and Alex quickly join in. It sounds tight, and they keep playing. Wow. My contact informs me that my brother, Steve and I will be sitting in Row 1, seats 7 8 and 9 for the show. Directly in front of Neil. Center stage. I can't speak. My brother says less than I do. I'm told there's something special planned for the concert. I can't imagine what it is.

The night before, Kevin and I talked about how Rush played "Losing It" off Signals for the first time ever live in Toronto the other night, and how it was a once in a lifetime Rush fan's dream. I assured him there's no way they'd ever do that again.

5:15 - Sound check continues, and then violinist Johnny Dinklage, who happens to be Tyrion Lannister's real-life brother, sets up on stage. He was in the string section on the last tour and lives in Jersey. The band has decided to do "Losing It" again as we watch in awe as they jam. I've never been happier telling my brother I was wrong about something.

5:25 - Sound check wraps up and we head to the hospitality area. I point out to my brother how we are exiting stage left. On our way we bump into Ray Danniels, the long-time manager of the band. We say hello and thank you, and Ray is super polite. Canadian super polite. He indulges us for 20 minutes discussing touring, Apple Music, hockey and the effect of the Rock and Roll Hall of Fame. He could have given us a polite wave. Instead he gave us his time.

5:50 - Now we are in the hospitality area with Rich Sibbald who is the band photographer on this leg of the tour. We discuss how far New Jersey is from Manhattan, Randy Johnson's photography skills, and how to get the right shots of the band. He offers earplugs and anything we might need. He is very nice. Canadian nice.

6:20 - Time for the meet and greet (surprise, Steve and Kevin), but Rush fans know if you're fortunate enough to get one of these, you can only meet the guys once. And Neil isn't going to be there. I thought I'd double up since I was going Monday night as well, but thought better of it and let the other guys go. Jealous? You bet I was. Steve tells me my brother commented on how nervous everyone else was not realizing he was just as nervous in his Rush t shirt. I chatted with Rich and other members of the Rush team. All fantastic folks.

7:00 - A few others enter our sacred ground. This space regularly serves as a hockey locker room, and we joke how this is clearly a visitor's room with no sign of Brodeur or Daneyko around. The show is scheduled for 7:30 and we don't want to leave this backstage oasis. So we stay put, and do more meeting and greeting with folks backstage.

7:30 - Off to the seats. I have never sat front row at a concert before. I've been in suites and have had really good seats, but never front row.

And this wasn't any band...it was Rush. The video begins, but I can't see it as I'm too close and straining to look up. What a great problem to have. Earplugs in. 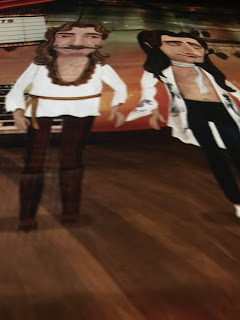 7:45 - The curtain goes up and "The Anarchist" begins. I am directly in front of Neil and his drums. 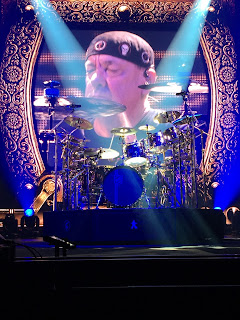 I gaze left to see Alex. 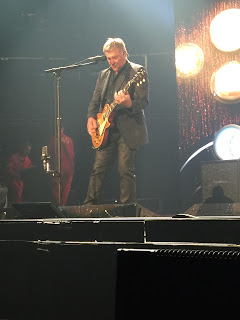 I look to my right to see Geddy. 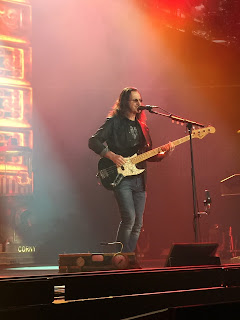 I cannot see the entire band at once. This is officially the best problem I have ever had.

7:53 - I snap out of it as "Headlong Flight" begins, my favorite song off Clockwork Angels. The band sounds fantastic, the best I've heard them in years. Neil does his thing, and then they play "Far Cry" and "The Main Monkey Business". All good, and then "How It Is" sneaks into the set list. The three of us continue to be awestruck.

8:30ish - Geddy asks to be animated, and then "Roll The Bones" starts up. It is amazing how fans have done such a 180 on this tune, and the celebrity laden rap video cements the adulation. Glad to see the skeleton go, but I'd still love to hear Neil on the mic just once. Another surprise comes with "Between The Wheels", and then THE surprise happens next.

8:40 - Johnny Dinklage takes the stage as Geddy informs us how they are about to perform "Losing It" live for only the second time ever. The crowd gushes, and the foursome on stage simply rocks. This was a great moment for long-time Rush fans. 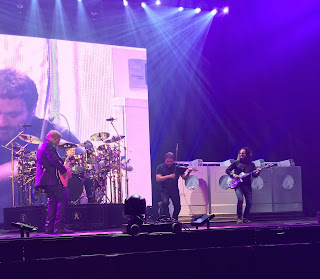 8:46 - The keyboards blare the opening of "Subdivisions", and we are ready to close the first set. The stage has been completely replaced with items to reflect the late 80's era we are now in. The band is playing classic tunes going back in time. Worlds collide as I look up at the screen for the closing jam and see Tempest targeting Neil's head. Geek serendipity! 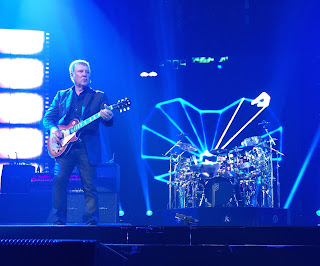 8:55 - Intermission. Take a breath. We head back to the hospitality area for a break. Didn't even realize I'd been standing for the past hour and didn't even care. We ran into our new friends and raved about the show, when Ray Danniels glances down at my Michigan tee and asks if I'd like to say to another Michigander.

When I graduated from the University of Michigan in 1989, "Roger and Me" was making waves and people were getting to know Michael Moore. He had just spoke at State as I recently did in Ann Arbor, so we teased each other about the respective schools and bonded over Rush fandom. You may not like his politics, but he is a fun guy to spend an intermission with.

9:15 - Once Cartman declares he is Geddy Lee, I know the second set is about to kick off with "Tom Sawyer". Curtain goes up, and I'm right there as Geddy describes his favorite warrior. 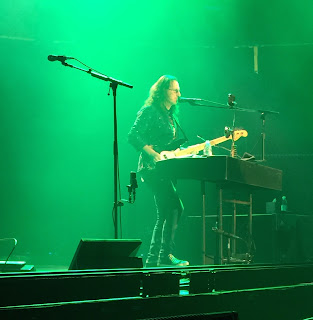 9:20 - I was sure "The Camera Eye" was going to be played at the Garden, but once again I was wrong. The journey from the streets of Manhattan to London happens at The Rock. I finally get a shot of Neil visible behind his kit (a different one for this set with a double kick drum). 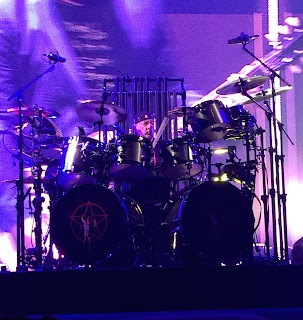 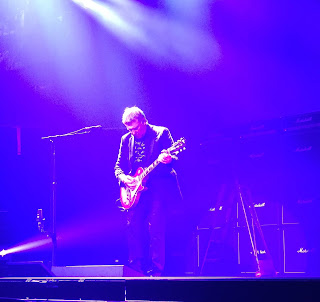 9:40 - Greatness continues with "Jacob's Ladder" and a couple of "Cygnus"-es. Geddy seems to be enjoying himself as he drifts in and out of different time signatures. 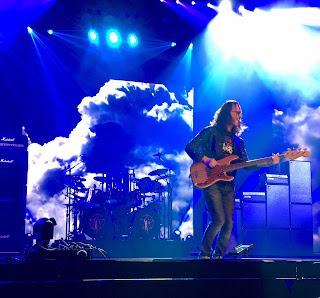 10:00 - An acoustic glitch to start "Closer To The Heart", but no one cares. The crowd sings along to the FM staple. Then it's time for the Pleasuredome as the double necks arrive for "Xanadu". 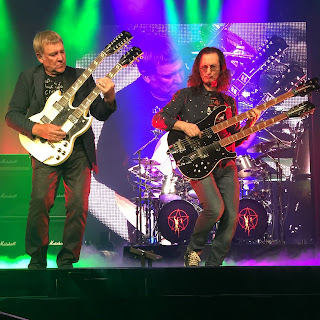 10:15 - Time for "2112". I have heard this countless times in concert, and it never gets old. The trio on stage doesn't seem to mind, and neither do my brother and I as we gaze upon them still awestruck.


10:25 - The curtain goes down, but everyone knows the band is soon to return. A gigantic Eugene Levy pops on the screen as one of my SCTV favorites, Mel Sirrup, host of Mel's Rock Pile. The curtain rises and the stage is now a high-school gym as the band relives its early years with one of my favorites, "Lakeside Park". 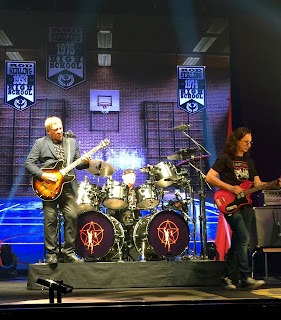 10:30 - A disco ball descends as Geddy belts out three of their oldest tunes, "Anthem", "What You're Doing" and my all-time Rush favorite, "Working Man". 40 years of songs, and they end with one of their first. Truly amazing. 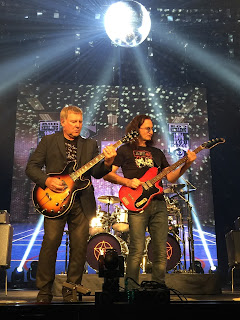 10:35 - And just like that, it's over. One of the best Rush shows I've ever seen. A night I will not soon forget. Of course, being up front made it all the more sweet, but there was a vibe at The Rock all night long that made this a special evening for everyone who attended.

10:40 - I make my way backstage and thank anyone in sight for such a special evening. But we are not done yet. I'm given a copy of Hugh Syme's "The Art of Rush" which chronicles all of the band's artwork. I contributed a blurb on my favorite covers and get to read my words of praise right under Taylor Hawkins (it's in alphabetical order) and feel quite proud. 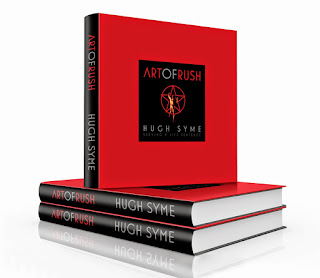 10:45 - I bump into Ray Danniels again, and he thanks me for coming and doing the video. I shake his hand and think to myself, "What video?". I soon learn that another documentary is being produced and they want to hear from fans, so I'm happy to oblige and talk to the camera. All I have to do is follow the person before me, none other than Michael Moore. Nothing like setting the bar high when it comes to appearing in documentaries. We'll see if I make the cut.

In two days, I will head to Madison Square Garden with Gary Dell'Abate, Richard Christy and Ralph Cirella to do this all over again.

I will get to say hello to Geddy and Alex at the meet and greet.