Thanks for your feedback regarding my Best TV of 2015. I'm glad you're enjoying the recommendations.

Many of you missed my nightly TV suggestions, and to be honest, I miss discussing TV on a regular basis. So in 2016, I've decided to post some random thoughts as to what I'm watching.

I will do my best not to spoil anything. No guarantees, because some conclusions are too tempting not to talk about.

I started off the year tweeting this: 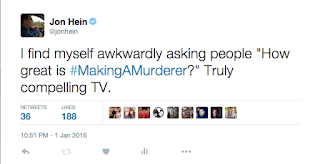 This must-see documentary series kicks off with a fantastic first ep recounting the ongoing plight of Steven Avery in Manitowoc County, Wisconsin.

You'll be hooked from the get go, and you're inhuman if you're not compelled by his story.

I'm no fan of reality shows, mostly because there's no reality in them (Survivor is my lone exception). Making A Murderer is a "reality show" done right - a documentary about real people dealing with the struggle of the Wisconsin legal system and not looking to see where the next camera is.

It is ten episodes long, and well worth your time.

The Man in the High Castle (AMAZON)

I watched the opening credits of this "what if we lost World War II" story and smiled (not because of the fictional World War II outcome).

The theme song is Edelwiess, and I love the cheesiness of The Sound of Music.

The show's creator is Frank Spotnitz, and I'm a fan of Frank's because he co-wrote an episode of The X-Files entitled "Jump The Shark" with two guys you might have heard of - John Shiban and Vince Gilligan.

I visited The X-Files set and was slated to appear in the episode, but I had to catch a flight back to New York. At least I still have the script.

But I digress. Frank always makes good TV, and this Amazon series looks like no exception. Lots of secrets and twists are mixed into the Philip K. Dick story profiling a different kind of America.

I only caught the pilot, but I'm very intrigued.

Caught the first two eps of season two with my better half, and those might be the only two that I watch.

The acting remains top notch, but it feels like Transparent is trying way too hard to be different, something it inherently doesn't have to do.

I love Jeffrey Tambor and Judith Light, and if the story focused mostly on them, count me in. But it doesn't - it deals with the trials and tribulations of their three screwed up kids, and frankly, I just don't care as much about them.

We'll probably be back, but there's a lot of other stuff to watch (and not just on Amazon).

Mozart in the Jungle (AMAZON)

Okay, I've been watching a lot of Amazon lately. Thanks to @NikRuckert for this recommendation.

The title sounds pretentious, and I get how life in various Manhattan orchestra pits might not appeal to everyone. I was initially turned off by the premise, but too many people whom I respect told me to tune in.

So I did. And it's funny, very interesting, and Bernadette Peters does not age. I will be watching more of season one with Debbie and we'll see how it goes.

LAST BUT NOT LEAST

Stumbled on to a Mr. Robot marathon on USA. Can't wait for season two of that gem.

It's not New Year's Eve without a late night Honeymooners episode. Good to see Captain Video. Switched to the Twilight Zone marathon on SyFy. Always room for one more, honey.

My daughters are home for winter break and watching Gilmore Girls and Friday Night Lights on Netflix. Solid writing up in Stars Hollow and down in Dillon.

P.S.  If I missed something or you have a recommendation, tweet me @jonhein.

P.P.S. My new book Fast Food Maniac comes out in less than a month. I think you're gonna like it.
Posted by Jon Hein at 9:23 AM